In the previous sections, we discussed symmetric-key schemes such as block ciphers and MACs. For these schemes to work, we assumed that Alice and Bob both share a secret key that no one else knows. But how would they be able to exchange a secret key if they can only communicate through an insecure channel? It turns out there is a clever way to do it, first discovered by Whit Diffie and Martin Hellman in the 1970s.

A useful analogy to gain some intuition about Diffie-Hellman key exchange is to think about colors. Alice and Bob want to both share a secret color of paint, but Eve can see any paint being exchanged between Alice and Bob. It doesn’t matter what the secret color is, as long as only Alice and Bob know it.

To hide their secret colors, Alice and Bob agree on a publicly-known common paint color–in this example, green. They each take their secret color, mix it with the common paint color, and then send it over the insecure channel. Alice sends a green-amber mixture to Bob, and Bob sends a green-blue mixture to Alice. Here we’re assuming that given a paint mixture, Eve cannot separate the mixture into its original colors.

The secret exchange in the color analogy relied on the fact that mixing two colors is easy, but separating a mixture of two colors is practically impossible. It turns out that there is a mathematical equivalent of this. We call these one-way functions: a function \(f\) such that given \(x\), it is easy to compute \(f(x)\), but given \(y\), it is practically impossible to find a value \(x\) such that \(f(x) = y\).

A one-way function is also sometimes described as the computational equivalent of a process that turns a cow into hamburger: given the cow, you can produce hamburger, but there’s no way to restore the original cow from the hamburger.

There are many functions believed to be one-way functions. The simplest one is exponentiation modulo a prime: \(f(x) = g^x \pmod{p}\), where \(p\) is a large prime and \(g\) is a specially-chosen generator1.

Given \(x\), it is easy to calculate \(f(x)\) (you may recall the repeated squaring algorithm from CS 70). However, given \(f(x) = g^x \pmod{p}\), there is no known efficient algorithm to solve for \(x\). This is known as the discrete logarithm problem, and it is believed to be computationally hard to solve.

Using the hardness of the discrete log problem and the analogy from above, we are now ready to construct the Diffie-Hellman key exchange protocol.

Alice and Bob first establish the public parameters \(p\) and \(g\). Remember that \(p\) is a large prime and \(g\) is a generator in the range \(1<g<p-1\). For instance, Alice could pick \(p\) and \(g\) and then announce it publicly to Bob. Today, \(g\) and \(p\) are often hardcoded or defined in a standard so they don’t need to be chosen each time. These values don’t need to be specific to Alice or Bob in any way, and they’re not secret.

Symmetrically, Bob uses his knowledge of \(A\) and \(b\) to compute

Finally, Alice and Bob can use \(S\) as a shared key for a symmetric-key cryptosystem (in practice, we would apply some hash function to \(S\) first and use the result as our shared key, for technical reasons).

The amazing thing is that Alice and Bob’s conversation is entirely public, and from this public conversation, they both learn this secret value \(S\)—yet eavesdroppers who hear their entire conversation cannot learn \(S\).

Here is how this applies to secure communication among computers. In a computer network, each participant could pick a secret value \(x\), compute \(X=g^x \bmodp\), and publish \(X\) for all time. Then any pair of participants who want to hold a conversation could look up each other’s public value and use the Diffie-Hellman scheme to agree on a secret key known only to those two parties. This means that the work of picking \(p\), \(g\), \(x\), and \(X\) can be done in advance, and each time a new pair of parties want to communicate, they each perform only one modular exponentiation. Thus, this can be an efficient way to set up shared keys.

Here is a summary of Diffie-Hellman key exchange:

For this class, you don’t need to understand the underlying math that makes elliptic-curve Diffie-Hellman work, but you should know that the idea behind the protocol is the same.

Because of the properties of the elliptic curve, Alice and Bob will derive the same point \(S\), so they now have a shared secret. Also, the elliptic-curve Diffie-Hellman problem states that given \(A = a \cdot G\) and \(B = b \cdot G\), there is no known efficient method for Eve to calculate \(S\).

Thus, if we are using Diffie-Hellman key exchange with other cryptoschemes, we try to relate the difficulty of the schemes so that it is equally difficult for an attacker to break any scheme. For example, 128b AES tends to be used with SHA-256 and either 256b elliptic curves or 2048b primes for Diffie-Hellman. Similarly, for top-secret use, the NSA uses 256b AES, 384b Elliptic Curves, SHA-384, and 3096b Diffie-Hellman and RSA.

As we’ve seen, Diffie-Hellman is secure against an eavesdropper Eve, who observes the messages sent between Alice and Bob, but does not tamper with them. What if we replace Eve with Mallory, an active adversary (man-in-the-middle) who can tamper with messages?

It turns out the Diffie-Hellman key exchange protocol is only secure against a passive adversary and not an active adversary. If Mallory can tamper with the communication between Alice and Bob, she can fool them into thinking that they’ve agreed with a shared key, when they have actually generated two different keys that Mallory knows. 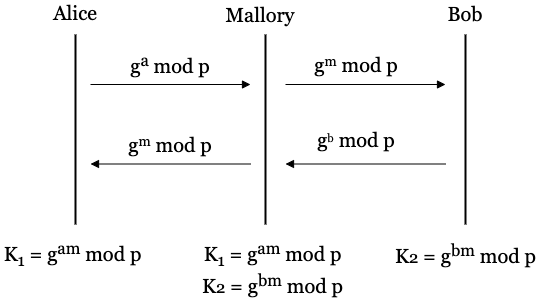 If Alice and Bob fall victim to this attack, Mallory can now decrypt any messages sent from Alice with Alice’s key \(g^{ma} \pmod{p}\), make any changes to the message, re-encrypt the message with Bob’s key \(g^{mb} \pmod{p}\), and send it to Bob. In other words, Mallory would pretend to Alice that she is Bob, and pretend to Bob that she is Alice. This would not only allow Mallory to eavesdrop on the entire conversation but also make changes to the messages without Alice and Bob ever noticing that they are under attack.