Recall that IP, the layer 3 (inter-network) protocol, is a best-effort protocol, meaning that packets can be corrupted, reordered, or dropped entirely. Also, IP addresses uniquely identify machines, but do not support multiple processes on one machine using the network (e.g. multiple browser tabs, multiple applications).

The transport layer solves the problem of multiple processes by introducing port numbers. Each process on a machine that wants to communicate over the network uses a unique 16-bit port number. Recall that port numbers are unique per machine, but cannot be used for global addressing–two machines can have processes with the same port number. However, an IP address and a port number together uniquely identify one process on one machine.

On client machines, such as your laptop, port numbers can be arbitrarily assigned. As long as each application uses a different port number, incoming packets can be sorted by port number and directed to the correct application. However, server machines offering services over the network need to use constant, well-known port numbers so client machines can send requests to those port numbers. For example, web servers always receive HTTP requests at port 80, and HTTPS (secure) requests at port 443. Ports below 1024 are “reserved” ports: only a program running as root can receive packets at those ports, but anyone can send packets to those ports.

The transport layer has 2 main protocols to choose from: TCP guarantees reliable, in-order packet delivery, while UDP does not. Both protocols use port numbers to support communication between processes. The choice of protocol depends on the context of the application.

UDP (user datagram protocol) is a best-effort transport layer protocol. With UDP, applications send and receive discrete packets, and packets are not guaranteed to arrive, just like in IP. It is possible for datagrams to be larger than the underlying network’s packet size, but this can sometimes introduce problems.

TODO: This diagram can be better. ~NN

TCP (Transmission Control Protocol) is a reliable, in-order, connection-based stream protocol. In TCP, a client first establishes a connection to the server by performing a handshake. Once established, the connection is reliable and in order: TCP handles resending dropped packets until they are received on the other side and rearranging any packets received out of order. TCP also handles breaking up long messages into individual packets, which lets programmers think in terms of high-level, arbitrary-length bytestream connections and abstract away low-level, fixed-size packets.

Like UDP, the TCP header contains 16-bit source and destination port numbers to support communication between processes, and a checksum to detect corrupted packets. Additionally, a 32-bit sequence number and a 32-bit acknowledgment (ACK) number are used for keeping track of missing or out-of-order packets. Flags such as SYN, ACK, and FIN can be set in the header to indicate that the packet has some special meaning in the TCP protocol.

TODO: This diagram can be better. ~NN

TCP communication works between any two machines, but it is most commonly used between a client requesting a service (such as your computer) and a server providing the service. To provide a service, the server waits for connection requests (sometimes called listening for requests), usually on a well-known port. To request the service, the client makes a connection request to that server’s IP address and well-known port. 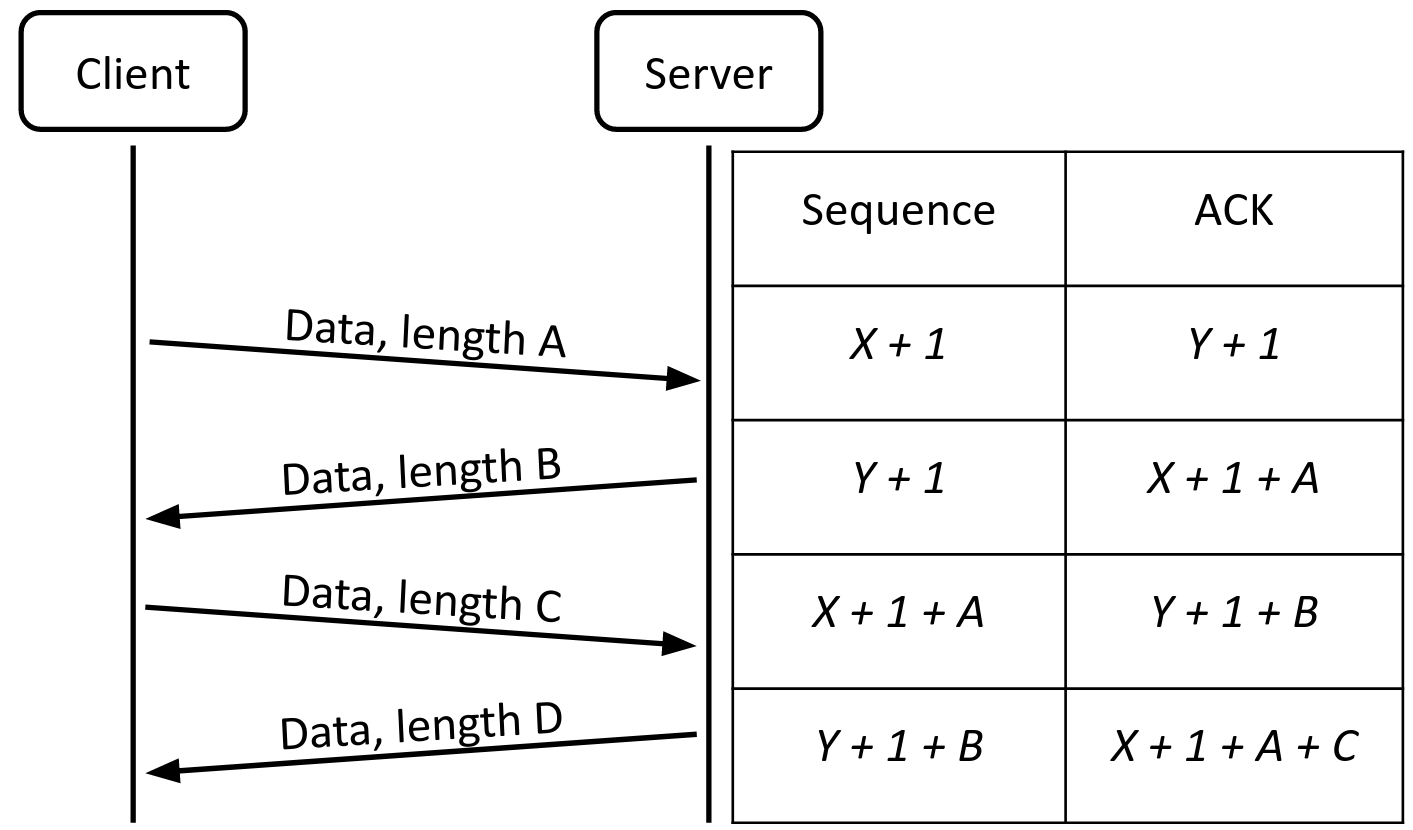 To ensure packets are successfully delivered, when one side receives a TCP packet, it must reply with an acknowledgment saying that it received the packet. If the packet was dropped in transit, the recipient will never send an acknowledgment, and after a timeout period, the sender will re-send that packet. 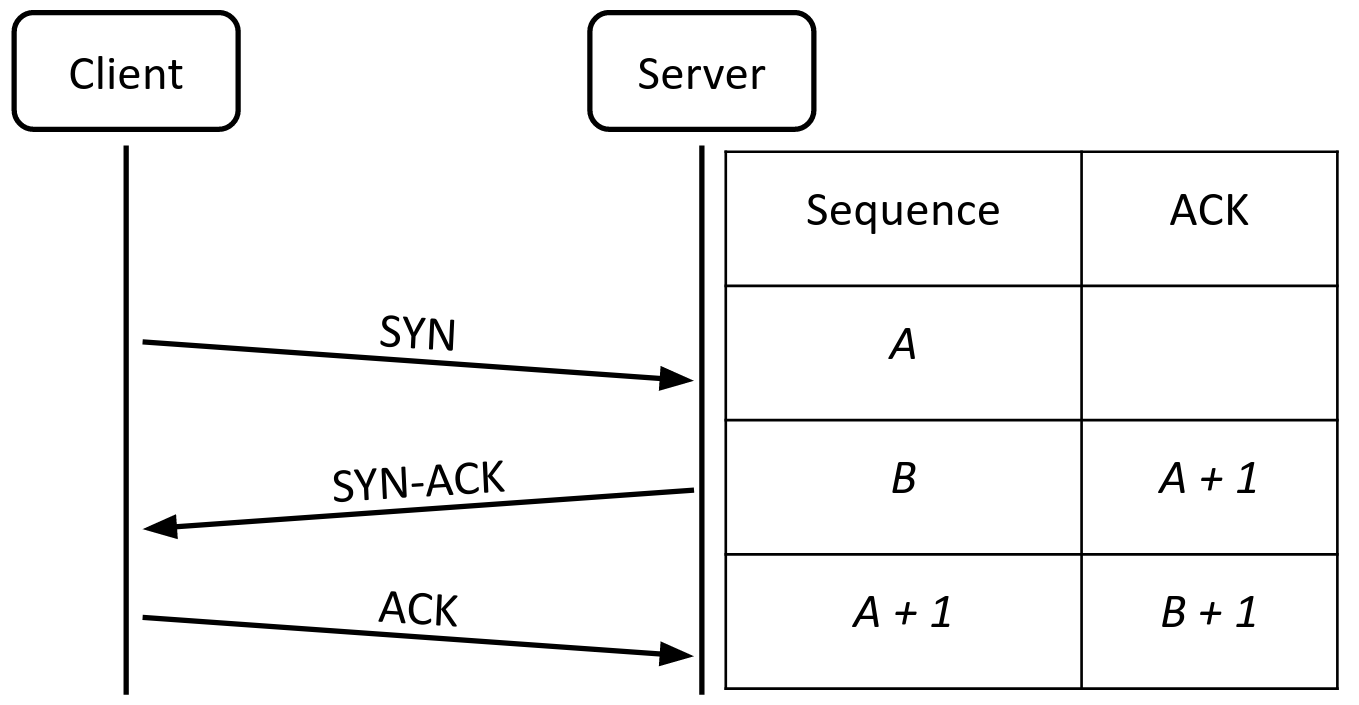 Note that the sequence numbers do not start at 0 (for a security reason discussed below). Instead, to initiate a connection, the client and server participate in a three-way TCP handshake to exchange random initial sequence numbers.

To end a connection, one side sends a FIN (a packet with the FIN flag set), and the other side replies with a FIN-ACK. This indicates that the side that sent the FIN will not send any more data, but can continue accepting data. This leaves the TCP connection in a “half closed” state, where one side stops sending but will receive and acknowledge further information. When the other side is done, it sends its own FIN as well, and it is acknowledged with a FIN-ACK reply.

30.5. Tradeoffs between TCP and UDP

TCP is slower than UDP, because it requires a 3-way handshake at the start of each connection, and it will wait indefinitely for dropped packets to resent. However, TCP provides better correctness guarantees than UDP.

UDP is generally used when speed is a concern. For example, DNS requires extremely short response times, so it uses UDP instead of TCP at the transport layer. Video games and voice applications often use UDP because it is better to just miss a request than to stall everything waiting for a retransmission.

The main attack in TCP is packet injection. The attacker spoofs a malicious packet, filling in the header so that the packet looks like it came from someone in the TCP connection.

Recall that that there are three types of network attackers. Each one has different capabilities in attacking the TCP protocol.

Off-path Adversary: The off-path adversary cannot read or modify any messages over the connection. Therefore, to attack a TCP communication, an off-path adversary must know or guess the values of the client IP, client port, server IP, and server port. Usually, the server IP address and port are well-known. Whether we know the client IP or port depends on our threat model. The off-path attacker must also guess the sequence number to inject a packet into the communication, because if the sequence number is too far off from what the recipient is expecting, it will reject the spoofed packet. Sanity check: What is the approximate probability of correctly guessing a random sequence number?1

On-path Adversary: The on-path adversary can read, but not modify messages. Since they can read the sequence numbers, IP addresses, and ports being used in the connection, an on-path adversary can inject messages into a TCP connection without guessing any values. As a concrete example, assume Alice has just sent a packet to Bob with sequence number X, and Bob responds with a packet of his own with sequence number Y and ACK X + 1. An on-path adversary Mallory wants to inject data into this TCP connection. While she cannot stop Alice from responding (because Mallory is not a man-in-the-middle), Mallory can race Alice’s next packet with her own, using sequence number X + 1, ACK Y + 1, and Alice’s IP and port. Since TCP on its own does not provide integrity, Bob will not be able to distinguish which message actually came from Alice, and which one came from Mallory.

The main problem here is that TCP by itself provides no confidentiality or integrity guarantees. To prevent injections like these, we rely on TLS, which is a higher-layer protocol that secures TCP communication with cryptography.