This section reviews some relevant concepts from CS 61C and introduces x86 assembly, which is different from the RISC-V assembly taught in 61C.

At the lowest level, computers store memory as individual bits, where each bit is either 0 or 1. There are several units of measurement that we use for collections of bits:

A “word” is the size of a pointer, which depends on your CPU architecture. Real-world 64-bit architectures often include stronger defenses against memory safety exploits, so for ease of instruction, this class uses 32-bit architectures unless otherwise stated.

Sometimes we use hexadecimal as a shorthand for writing out long strings of bits. In hexadecimal shorthand, a nibble can be written as a single hexadecimal digit. The chart below shows conversions between nibbles written in binary and hexadecimal.

Recall from 61C that there are four main steps to running a C program.

At runtime, the operating system gives the program an address space to store any state necessary for program execution. You can think of the address space as a large, contiguous chunk of memory. Each byte of memory has a unique address. 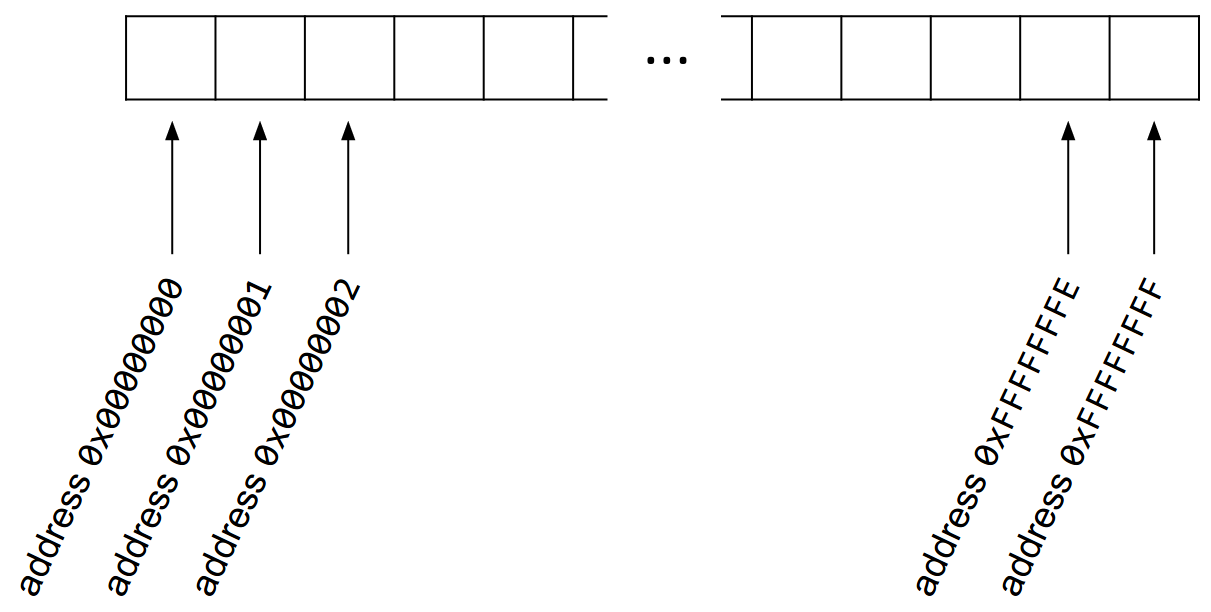 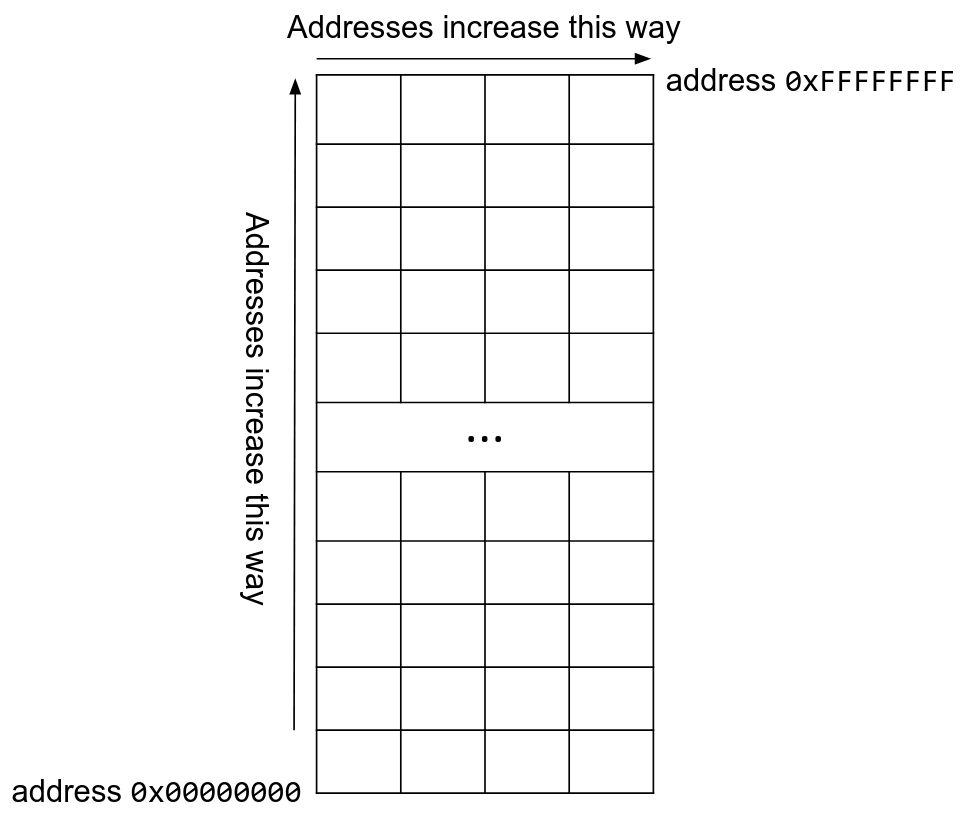 Although we can draw memory as a grid with annotations and labels, remember that the program only sees a huge array of raw bytes. It is up to the programmer and the compiler to manipulate this chunk of raw bytes to create objects like variables, pointers, arrays, and structs.

When a program is being run, the address space is divided into four sections. From lowest address to highest address, they are: 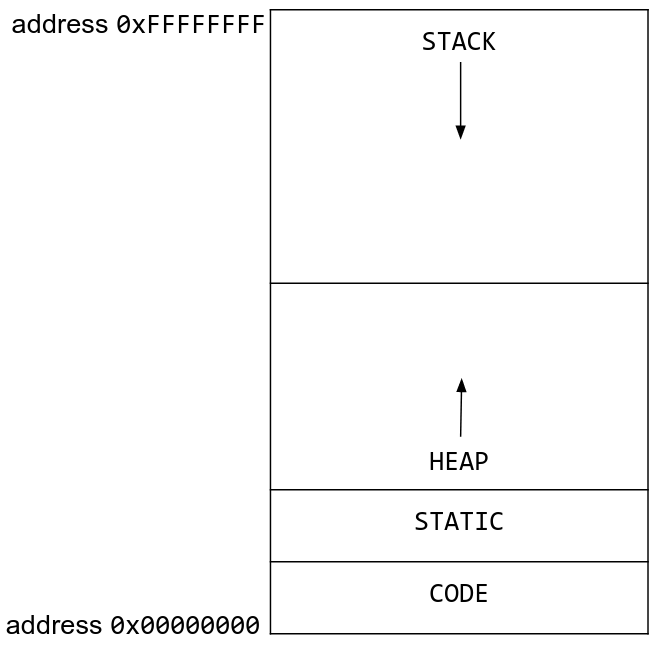 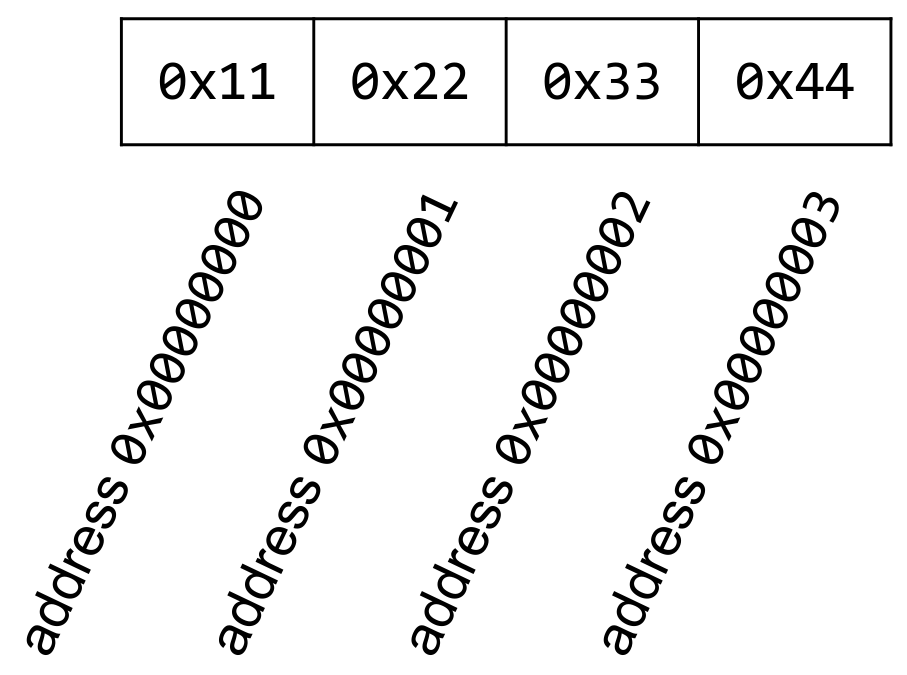 Because we work with words so often, sometimes we will write words on the memory diagram instead of individual bytes. Each word is 4 bytes, so each row of the diagram has exactly one word.

Using words on the diagram lets us abstract away little-endianness when working with memory diagrams. However, it’s important to remember that the bytes are actually being stored in little-endian format.

In addition to the \(2^{32}\) bytes of memory in the address space, there are also registers, which store memory directly on the CPU. Each register can store one word (4 bytes). Unlike memory, registers do not have addresses. Instead, we refer to registers using names. There are three special x86 registers that are relevant for these notes:

If you’re curious, the e in the register abbreviations stands for “extended” and indicates that we are using a 32-bit system (extended from the original 16-bit systems).

Sanity check: Which section of C memory (code, static, heap, stack) do each of these registers usually point to?5

Sometimes we want to remember a value by saving it on the stack. There are two steps to adding a value on the stack. First, we have to allocate additional space on the stack by decrementing the esp. Then, we store the value in the newly allocated space. The x86 push instruction does both of these steps to add a value to the stack.

We may also want to remove values from the stack. The x86 pop instruction increments esp to remove the next value on the stack. It also takes the value that was just popped and copies the value into a register.

(eax and ebx are general-purpose registers in x86. We use them here as an example of pushing and popping from the stack, but you don’t need to know anything else about these registers.)

References to registers are preceded with a percent sign, so if we wanted to reference eax, we would do so as %eax. Immediates are preceded with a dollar sign (i.e. $1, $0x4, etc.). Furthermore, memory references use parenthesis and can have immediate offsets; for example, 12(%esp) dereferences memory 12 bytes above the address contained in ESP. If parentheses are used without an immediate offset, the offset can be thought of as an implicit 0.

Suppose our assembly instruction was xorl 4(%esi), %eax; here, the opcode is xorl, the source is 4(%esi), and the destination is %eax. As such, in pseudocode, this can be written as EAX = EAX ^ *(ESI + 4). Since this is a memory reference, we are dereferencing the value 4 bytes above the address stored in ESI.

When a function is called, the stack allocates extra space to store local variables and other information relevant to that function. Recall that the stack grows down, so this extra space will be at lower addresses in memory. Once the function returns, the space on the stack is freed up for future function calls. This section explains the steps of a function call in x86.

When we call a function in x86, we need to update the values in all three registers we’ve discussed:

Here is the stack before the function is called. ebp and esp point to the top and bottom of the caller stack frame. 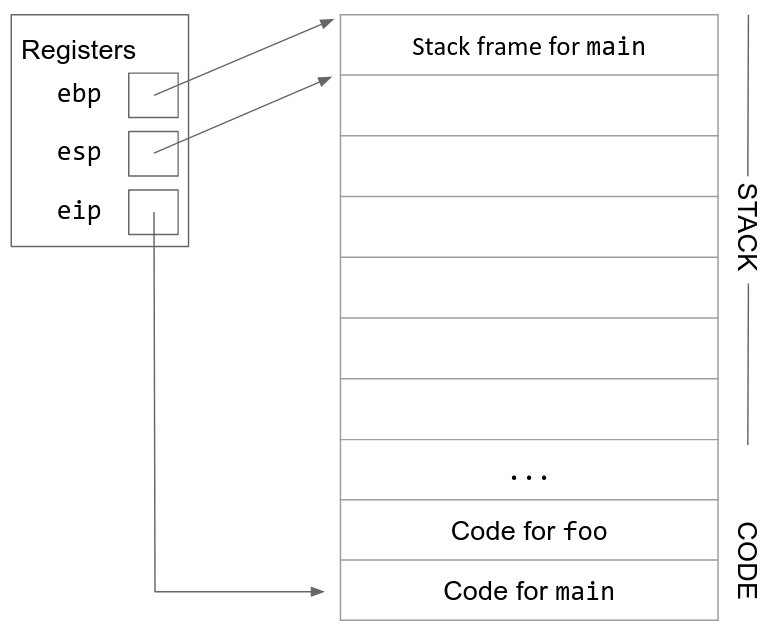 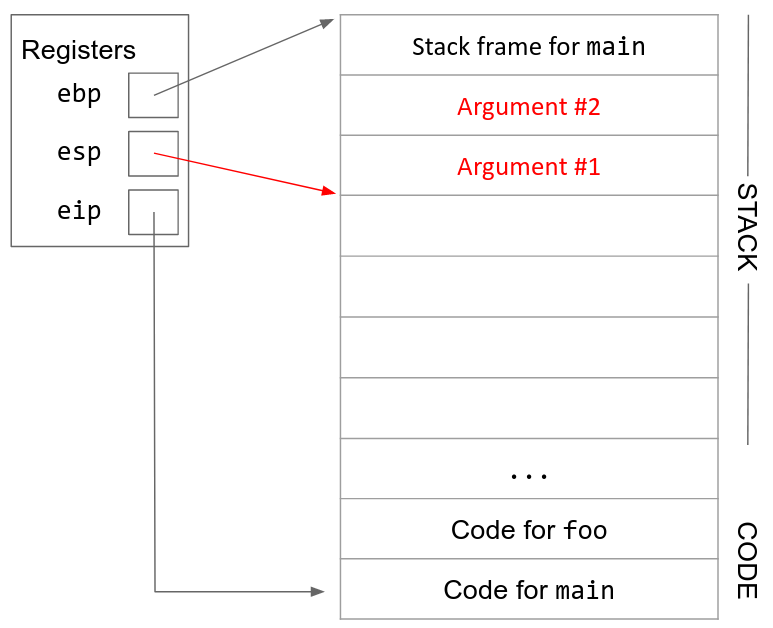 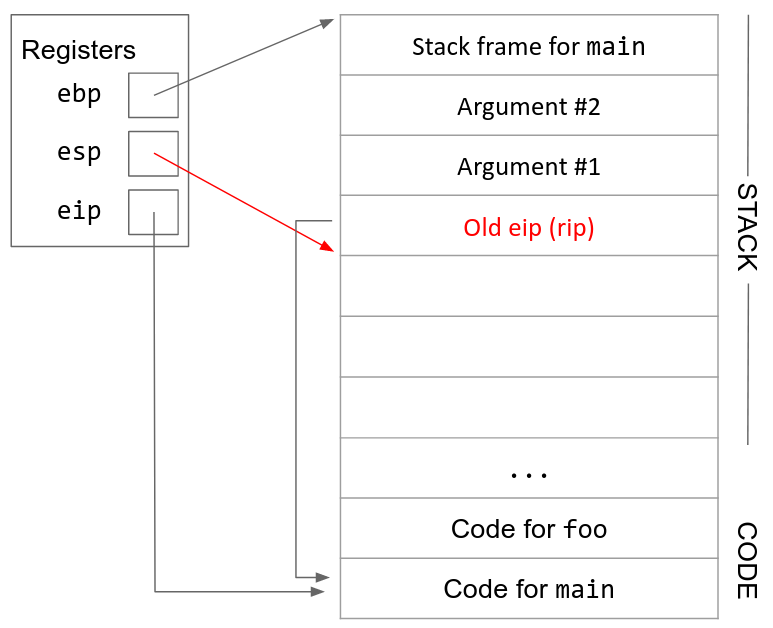 3. Move eip. Now that we’ve saved the old value of eip, we can safely change eip to point to the instructions for the callee function. 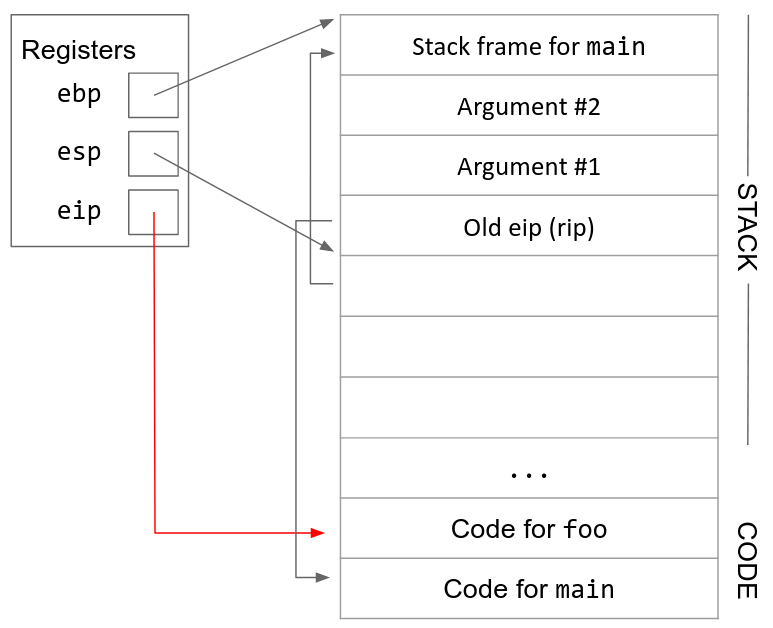 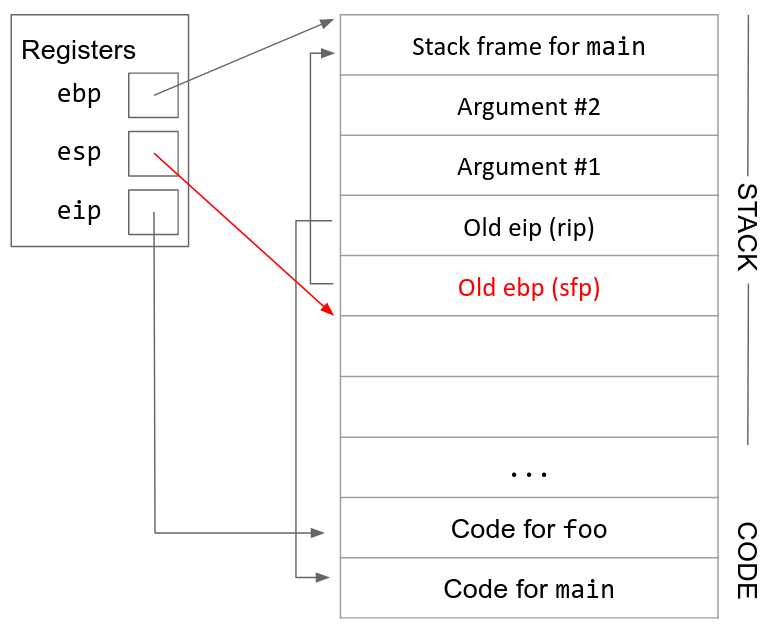 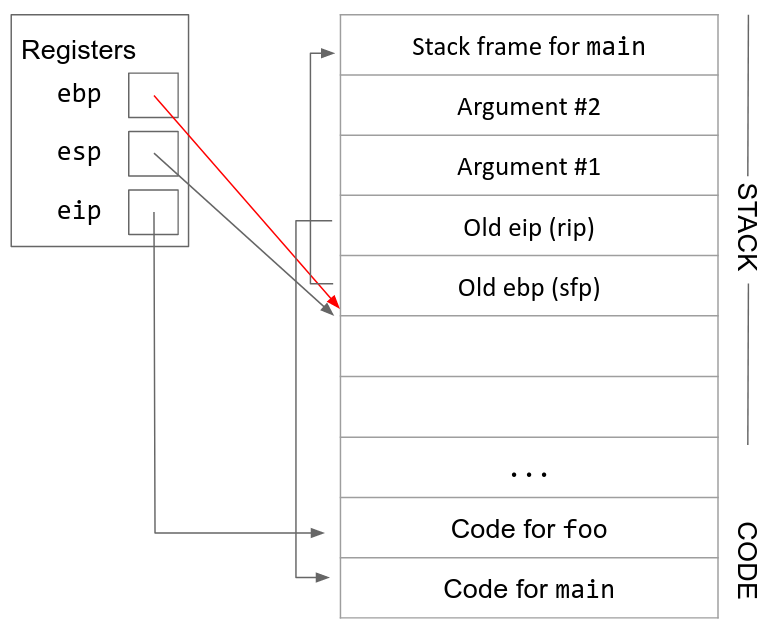 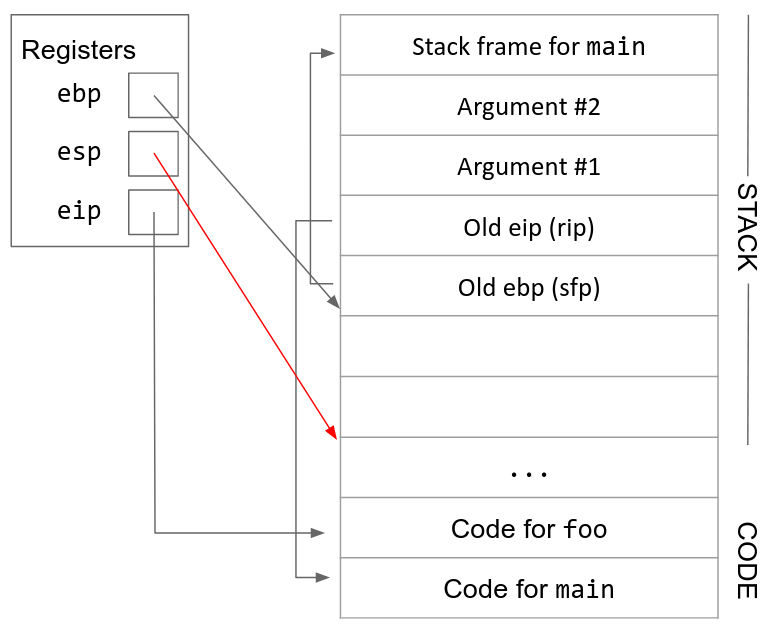 7. Execute the function. Local variables and any other necessary data can now be saved in the new stack frame. Additionally, since ebp is always pointing at the top of the stack frame, we can use it as a point of reference to find other variables on the stack. For example, the arguments will be located starting at the address stored in ebp, plus 8. 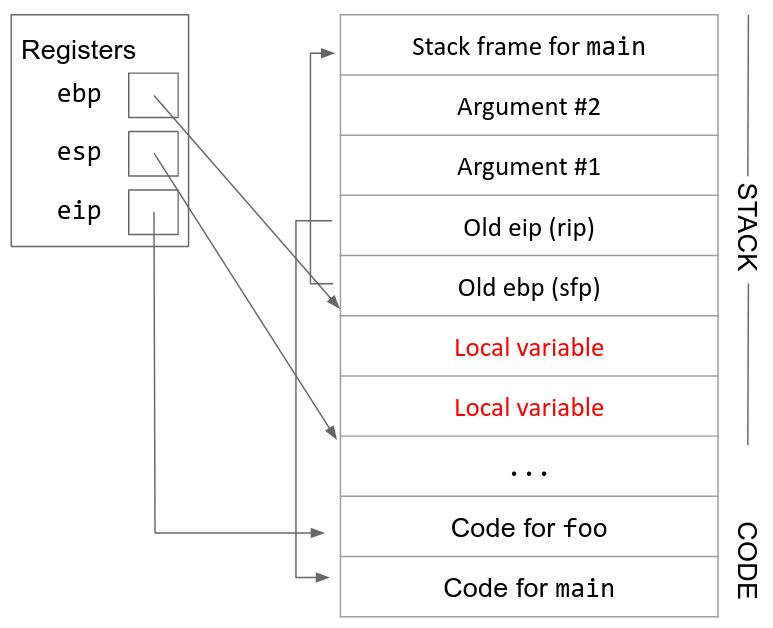 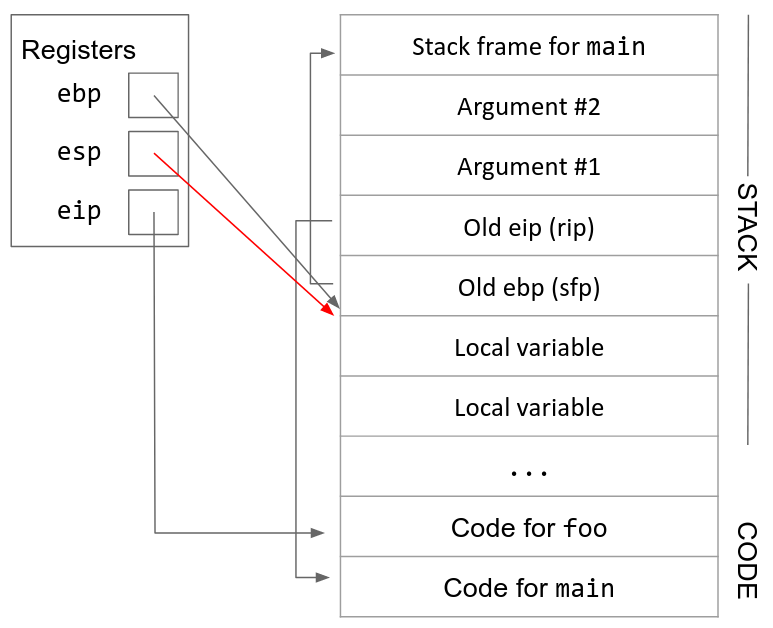 9. Restore the old ebp (sfp). The next value on the stack is the sfp, the old value of ebp before we started executing the function. We pop the sfp off the stack and store it back into the ebp register. This returns ebp to its old value before the function was called. 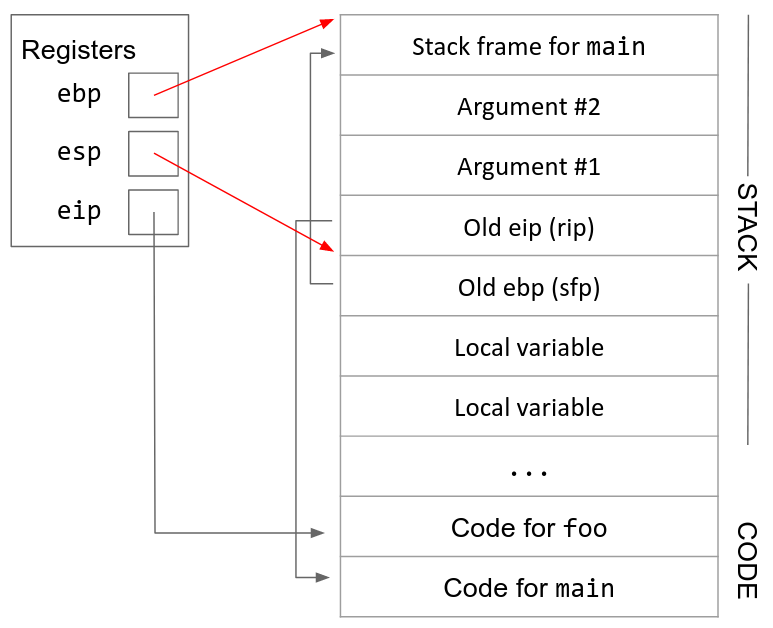 10. Restore the old eip (rip). The next value on the stack is the rip, the old value of eip before we started executing the function. We pop the rip off the stack and store it back into the eip register. This returns eip to its old value before the function was called.7 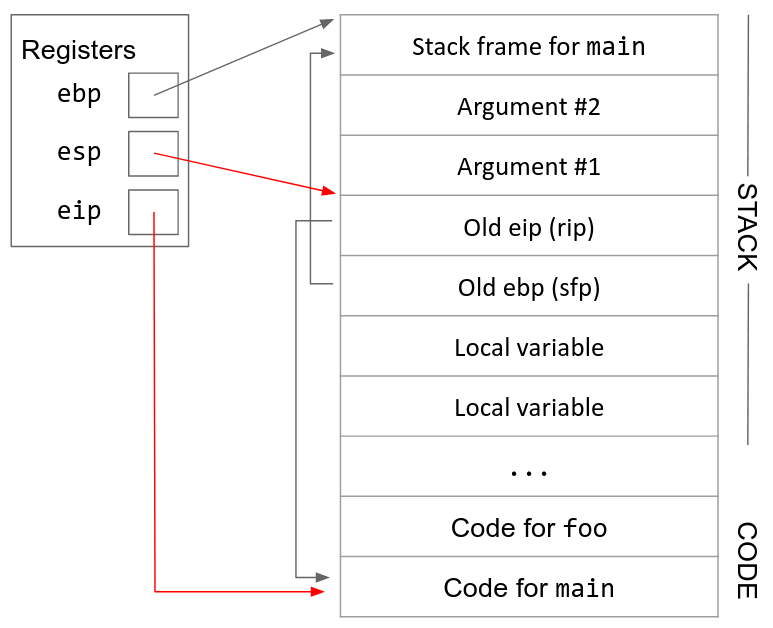 11. Remove arguments from the stack. Since the function call is over, we don’t need to store the arguments anymore. We can remove them by incrementing esp (recall that anything on the stack below esp is undefined). 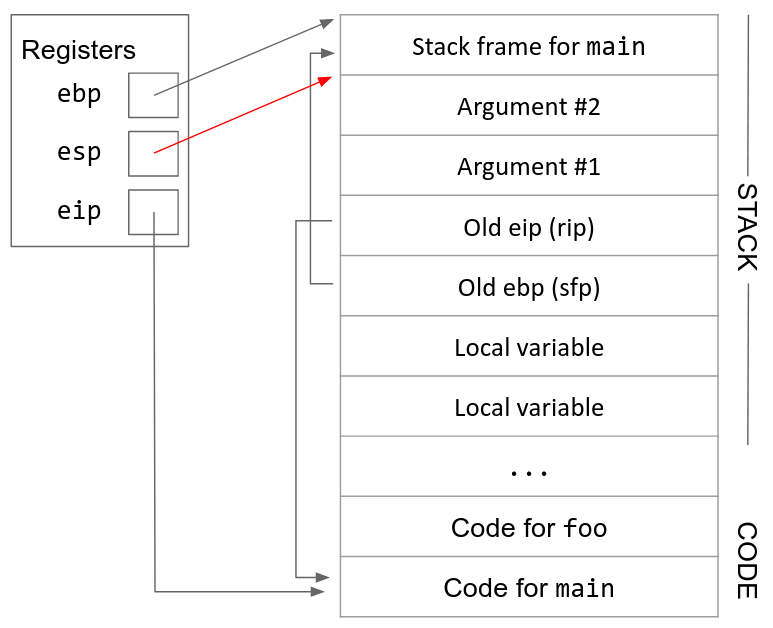 The compiler would turn the foo function call into the following assembly instructions:

The call instruction in steps 2-3 pushes the old eip (rip) onto the stack and then changes eip to point to the instructions for the foo function.

In step 6, esp is moved down by 16 bytes. The number 16 is determined by the compiler depending on the function being called. In this case, the compiler decides 16 bytes are required to fit the local variable and any other data needed for the function to execute.

This class uses AT&T x86 syntax, which means in the mov instruction, the source is the first argument, and the destination is the second argument. For example, step 5, mov %esp, %ebp says to take the value in esp and put it in ebp.8