Another implementation of the link layer is WiFi, which wirelessly connects machines in a LAN. Because it uses wireless connections over cellular networks, WiFi has some differences from wired Ethernet, but these are out of scope for this class. For the purposes of this class, WiFi behaves mostly like Ethernet, with the same packet format and similar protocols like ARP for address translation.

If the network is configured without a password, your computer immediately joins the network, and all data is transmitted without encryption. This means that anybody else on the same network can see your traffic and inject packets, like in ARP spoofing.

WPA2-PSK (WiFi Protected Access: Pre-Shared Key) is a protocol that enables secure communications over a WiFi network by encrypting messages with cryptography.

When a computer (client) wants to connect to a network protected with WPA2-PSK, the user must first type in the WiFi password. Then, the client uses the same key derivation function to generate the PSK. Sanity check: Why can’t we be done here and use the PSK to encrypt all further communications?2

To give each user a unique encryption key, after both the client and the access point independently derive the PSK, they participate in a handshake to generate shared encryption keys. 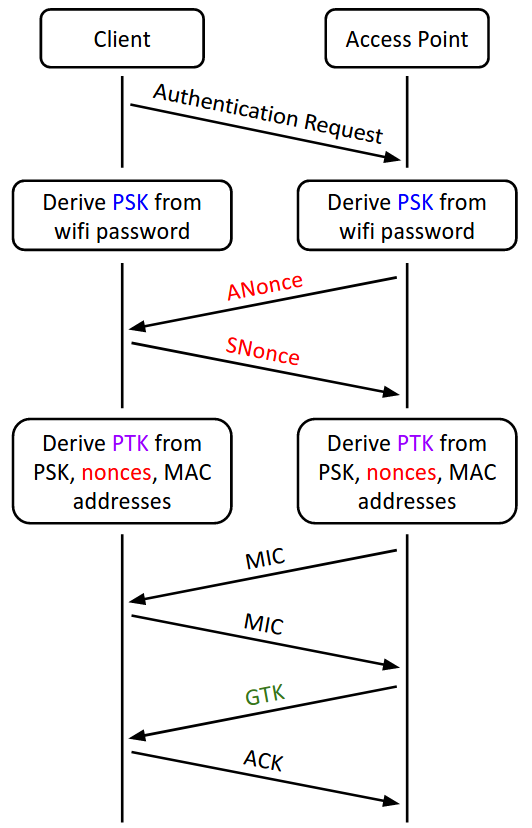 Once the handshake is complete, all further communication between the client and the access point is encrypted with the PTK.

The GTK is used for messages broadcast to the entire network (i.e. sent to the broadcast MAC address, ff:ff:ff:ff:ff:ff). The GTK is the same for everyone on the network, so everyone can encrypt/send and decrypt/receive broadcast messages.

In practice, the handshake is optimized into a 4-way handshake, requiring only 4 messages to be exchanged between the client and the access point. 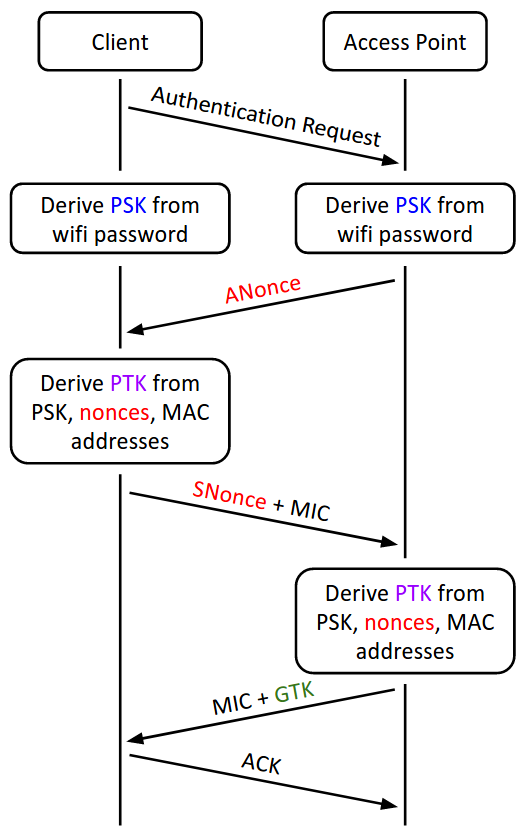 In the WPA2 handshake, everything except the GTK is sent unencrypted. Recall that the PTK is derived with the two nonces, the PSK, and the MAC addresses of both the access point and the client. This means that an on-path attacker who eavesdrops on the entire handshake can learn the nonces and the MAC addresses. If the attacker is part of the WiFi network (i.e. they know the WiFi password and generated the PSK), then they know everything necessary to derive the PTK. This attacker can decrypt all messages and eavesdrop on communications, and encrypt and inject messages.

The main problem leading to the attacks in the previous section is that every user on the network uses the same secrecy (the WiFi password) to derive private keys. To solve this, each user needs an different, unique source of secrecy. This modified protocol is called WPA2-Enterprise. AirBears2 is an example of WPA2-Enterprise that you might be familiar with.

WPA-2 Enterprise defends against the attacks from the previous section, because the PMK is created randomly by a third-party authentication server and sent over encrypted channels to both the AP and the client. However, note that WPA2-Enterprise is still vulnerable against another authenticated user who executes an ARP or DHCP attack to become a man-in-the-middle.